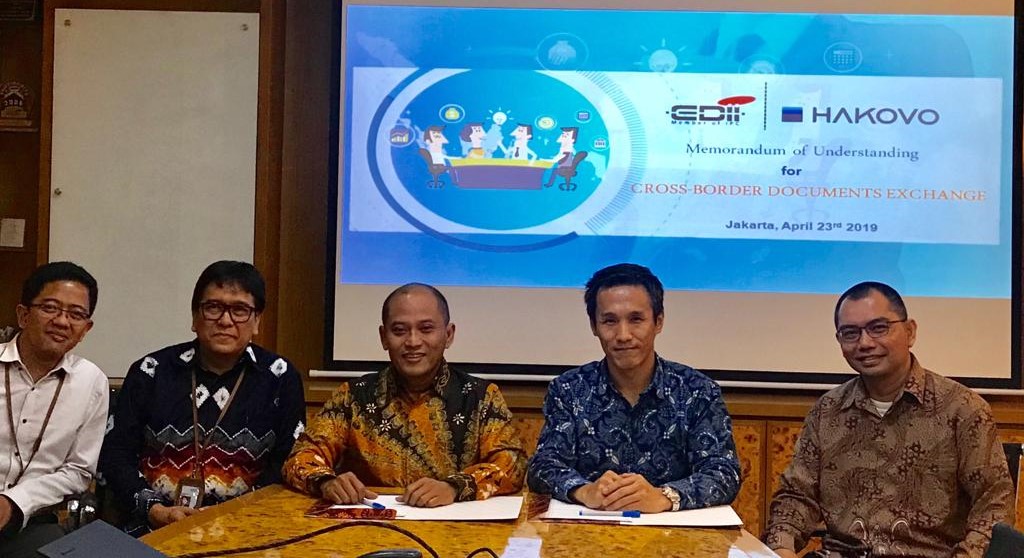 Under the MoU, EDII and HAKOVO® formed a partnership to jointly offer EDII’s Trade2Gov and HAKOVO® SMART CLEAR INDONESIA (ID) to our Customers. The digital offering will transform how overseas exporters and Indonesia importers experience entering goods into Indonesia.

Exporters will have pre-shipment intelligence on the import regulations based on HS Codes. Indonesia importers will have the data necessary for import the next business day after the Export Customs Approval at the Origin Country. This enables Indonesia importers to begin processing import shipment while the vessel is still at sea! This increases efficiencies in the import processing, and more importantly, reduces dwell times at the ports.

This new milestone followed a series of high-level engagements and a proof-of-concept between Indonesia Customs (DJBC), Indonesia National Single Window (INSW), and HAKOVO® since October 2018.

EDII President Director, E Helmi Wantono, shared, “This is a truly great collaboration with HAKOVO® in cross-border digital connectivity and data transformation technology. This will improve the new EDII’s Trade2Gov service which continues the long service aimed at Indonesia importers. HAKOVO® and EDII will provide complete functions that are effective in cross-border services between overseas exporters and Indonesia importers.”

HAKOVO® CEO, Takayuki Akahodani, added, “We’re honoured to jointly offer HAKOVO® cross-border digital connectivity and data transformation technology with EDII’s reach to Indonesia importers. EDII is the sole imports processing provider in Indonesia, and their Trade2Gov is web-enabled 24/7 with a number of value-added services. Together, we will digitally connect the world with Indonesia. And our customers will benefit from overall reductions in operations cost and shorter dwell times for their cross-border trade and freight.”